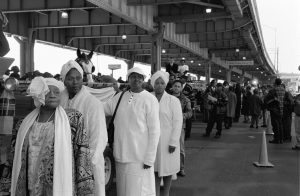 During excavation for yet another federal office building in lower Manhattan, workers stumbled upon the skeletal remains of over four hundred men, women, and children. Further investigation confirmed that during the seventeenth and eighteenth centuries, free and enslaved Africans were buried in a 6.6-acre burial ground, beyond the boundaries of the New Amsterdam Settlement. After over four centuries of development and expansion, the unmarked burial grounds and its inhabitants lay silent and forgotten. Beginning on October fourth, 2004 and continuing annually to October of 2007 – a major display of the importance of this historical find engaged lower Manhattan from the South Street Sea Port, to Duane and Elk Streets.

On Friday October fifth 2007, the memorial dedication of the African Burial Grounds National Monument at Duane and Elk Streets was celebrated. A celebration that was too long in coming, fraught with resistance from the New York City government officials, and long over due.